“Our wildlife management program allows us to offer the best to you during your hunt.” 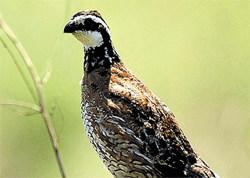 The sudden explosion of a bobwhite quail covey rising from the ground cover produces an exciting thrill, especially for a quail hunter. But because of extensive land development, there has been a reduction in the amount of habitat available for bobwhite quail hunting. As a result, the number of hunting preserves in many states has grown rapidly in recent years.

The use of bobwhite quail as a food source, both for home and in many dining establishments, also continues to increase. The Bobwhite Quail is one of the most popular of all quail. They are excellent fliers. There are said to be 44 species of quail, and more than 22 subspecies of northern bobwhites. Some have been known to weigh as much as 2 pounds. 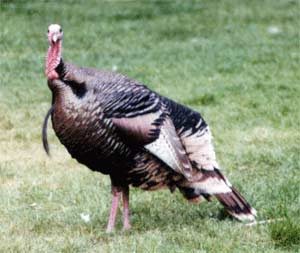 Wild turkeys live in woods in parts of North America and are the largest game birds found in this part of the world. They spend their days foraging for food like acorns, seeds, small insects and wild berries. They spend their nights in low branches of trees, yes, wild turkeys can fly.

Peacocks aren’t the only birds who use their fancy tails to attract a mate. Each spring male turkeys try to befriend as many females as possible. Male turkeys, also called “Tom Turkeys” or “Gobblers” puff up their bodies and spread their tail feathers (just like a peacock).

They grunt, make a “gobble gobble sound” and strut about shaking their feathers. This fancy turkey trot helps the male attract females (also called “hens”) for mating. After the female turkey mates, she prepares a nest under a bush in the woods and lays her tan and speckled brown eggs. She incubates as many as 18 eggs at a time. It takes about a month for the chicks to hatch.When the babies (known as poults) hatch they flock with their mother all year (even through the winter). For the first two weeks the poults are unable to fly. The mother roosts on the ground with them during this time.

Triple Wing Plantation hosts a healthy and vibrant wild turkey population.  Our wild turkeys are healthy and strong due to our land management and conservation program.  Our land management program provides our wild turkey population open fields in which to graze on healthy grasses as well as the safety and shelter of mature woodlands, cleared specifically to offer the optimum habitat for this cautious but strong bird.

In the early mist of the morning fog, you can see their silhouettes moving at the edge of the forest and hear their calls in all directions.

Known to many hunters as the morning dove, this minuscule tan and grey missile can accelerate to a blistering 55 miles per hour. Much to the delight of ammunition manufacturers, and the chagrin of many hunters, the grey rocket also can perform aerial acrobatics that would make a jet pilot queasy.

It’s the toughest target in wing-shooting to consistently hit. But for the lucky hunters that have figured out how to knock down these small projectiles, the table fare is well worth the effort. Considering the sheer cost of the ammunition required to harvest a pound of dove breasts, it may also be a very expensive dinner.

Contrary to popular belief, morning doves are not songbirds, but instead are small-framed cousins of the common pigeon, which is often seen eating popcorn and bread at the local park or roosting on a park statue. morning doves are migratory species that spend much of the winter in the southern part of the United States, although there are a hardy few that choose to brave the winter here.

The morning dove is one of the most abundant birds in North America, with populations that fluctuate annually. 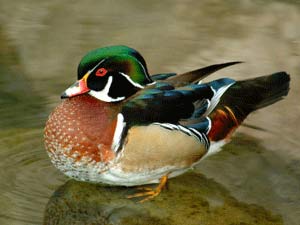 Wood Ducks were hunted relentlessly after the Europeans arrived on this continent. Relatively tame and unwary, they were easily killed from ambush. The drakes are at the peak of their plumage perfection during the breeding season and many were killed about their nests and mounted for home adornment. Later, their brightly colored feathers were in demand for artificial trout flies. It is probable that the species was saved from extinction by the protection afforded it under the Migratory Bird Convention in 1916, because the species has shown a marked recovery since then.

Wood Ducks frequently have difficulty in finding suitable nesting sites. Wood Ducks may use the same nest site year after year, and it was long presumed that the same pair returned together. More recently, through banding, it has been found that it is the female that comes back, but invariably with a new mate. 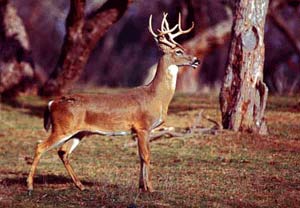 “White-tailed Deer” refers to the white underside of the tail, which is held conspicuously erect like a flag when the animal is alarmed or running. The adult White-tailed Deer has a bright, reddish brown summer coat and a duller grayish brown winter coat. White fur is located in a band behind the nose, in circles around the eyes, inside the ears, over the chin and throat, on the upper insides of the legs and beneath the tail. The young, called fawns, have reddish coats with white spots.

Adult males, called bucks, can weigh 300 pounds. White-tailed bucks average about 250 pounds and stand about 4 feet high at the shoulders. As in most deer species, the females (does) are smaller and weigh less.

We specialize in Georgia and South Carolina land sales.